The summer after my senior year, two of my best gal pals and I were given the amazing opportunity to travel (unaccompanied) overseas to Slovenia. This trip would be just over a week long prior to us continuing on to Athens, Greece, where we would join another great summer tour with Bring It Promotions. Throughout our week together, Marion, Taelor and I decided to forgo the typical journaling idea and be more contemporary with our writings. Thus the following compilation of "poems" emerged:

(here we skipped a few days of journals, due to inappropriate entries courtesy of black death *see image below*) 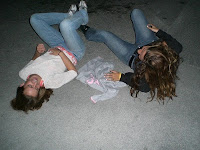 Saturday
We woke up, took showers and began to drink our H2O
With no one in school, oh the places we could go
Sara and Hana took us to visit some of their pals
Where we would spend the day riding horses in corrals
Pictures were taken with a famous rescue dog
We thought we found the missing man who was really just a log
Dog-person or cat-person, which one are you?
We had all three found out by the time we were through
Back to Andreja and Baco, up the mountain we must climb
To see we were imposing on their family time
We were eager to see what else was in store
As we traveled to visit Nejc in Maribor

Sunday
Good thing we had packed, for we woke well past noon
With a text message Nejc informs us to be ready "soon"
We went out with the kids to play some volleyball
As we waited for Nejc to give Baco a call
The hours past and we played with Bine in the swing
Before Nejc finally chose to give Baco a ring
We seem to have problems working the European car
As we could not manage to get his trunk ajar
We met Tine the volley-god who is very well known
Before picking up Marion's new best friend Stone
After dinner we went bowling where Alex won
This long lasting day is finally done


Sunday SLASH Monday, By Taelor and Meghan, as Marion was sleeping
We tossed and turned in Alex's bed that was too hot
It seemed that sleeping is an action our bodies forgot
We talked for hours learning more and more
Then we decided to go wake the boys next door
Meghan tried to key the lock but it did not fit
So instead laid out under the stars, not giving a sh*t
Finally we went back to our piping hot room
To our despair the tossing and turning did resume
MTV gave us a list of very interesting old songs
And we accidentally flipped to a channel that shows girls in thongs
The sun began to rise but it was only half past four
How on earth could we wait six hours more?
We managed to make it through this long dreadful night
As we went over to wake Nejc, his dad gave us a fright

Monday, by all three, on account of Marion FINALLY waking up
Marion awoke looking kinda tired
While Meghan and Taelor were quite wired
Nejc set us loose in the EuroPark mall
And he went to keep his bicepts from getting too small
After shopping and sneaking a McDonalds fry
Nejc took us to have some fresh pizza pie
We met his friends for a little volley pick up game
And instead of using their real ones, we gave each a nick name

Courtesy of Meghan at 4:26 PM No comments: