And here we go, life's waiting to begin...

6:00 am came far too early, and with far too much instant adrenaline. Today was the official start to a new chapter in my life and, man, was I pumped. After loading up the Suburban and doing a final walk-through of my room at home, we began our 140-mile journey to the Orlando International Airport. Upon arriving, we saw that most of the group was already checked in, and ready to go through security. After an initial group photo, Kara, Chelsea, and I led the way, ensuring everyone made it through the pat-downs unharmed. We had quite some time until our flight to Boston would board, so we all scattered for our first forage for food. It’s important to note that you never know when you’ll eat again on these trips, so eat what you can, when you can. That said, Kendra and I decided to hit up the BK lounge for our final American meal. Many of our group sat around the help desk area to eat and rest from our drive before we would make our way over to our departure gate. “Flight delays…” I overheard someone say, and instantly knew this could mean trouble. We had to turn in our original boarding passes for the flight to Boston so we could try to get flights changed in order to not miss our connections. Boston was snowed in; there would be no air travel in or out of the city. Panic rushed through the girls like wildfire. 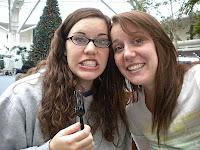 As travel experts, Kamryn and I did what any well-seasoned traveler would in such a crisis: eat. And take pictures. We finished off the remainder of Big’s salad while he worked on rebooking us through Miami. Miss Paula took the group downstairs to reclaim our luggage while Ceej and Big finished reticketing everyone. We had been rerouted onto an outbound flight from Miami into Rome that would depart at 4:45pm. It was already 12:30. The group was divided into three cars and began hauling it down the turnpike towards Miami. Big managed to get us to the airport safely in just over three hours. Oh hey, Mario Andretti.

My last day in America would have to wait until tomorrow, as poor weather up north forced me to miss my connecting flight out from Miami. The group checked in and began exchanging their US cash for Euros while I waited in line to change my ticket from departing Sunday to Monday. Big and I had just left the ticket counter when I remembered I needed to shortstop my ticket and baggage in Rome instead of continuing on to Catania. I got back in line to fix my ticket while the group began to head to security. A few family photos later, and it was time to bid my parents and sister farewell. I would not see them again until possibly May, if you don’t count the numerous Skype dates that will occur between then and now. The Delta ticket counter was less than helpful in attempting to shortstop my ticket in Rome, and sent me over to the Alitalia ticket counter, claiming it was their problem to handle. Alitalia was unable to help me and merely sent me back over to the Delta line. I called Big to explain the situation and he instructed me to stay at Alitalia and have them help me to the best of their abilities or walk me down to Delta to ensure that some changes are made. 20 minutes later, I still had made no progress. Big came back through security to assist me. About an hour and a half later, we had made two contacts via phone, and one at the ticket counter and finally: SUCCESS! My ticket would stop at Rome. Big left me again, and I left the airport to drive to my uncle’s house. Due to the utter chaos of my day, I was extremely scatterbrained and unable to follow the multiple sets of instructions he gave to me. Finally surrendering to the craziness of my day, I pulled over and waited for him to find me.

“Adventure is a path. Real adventure – self-determined, self-motivated, often risky – forces you to have firsthand encounters with the world. The world the way it is, not the way you imagine it. Your body will collide with the earth and you will bear witness. In this way you will be compelled to grapple with the limitless kindness and bottomless cruelty of humankind – and perhaps realize that you yourself are capable of both. This will change you. Nothing will ever again be black-and-white.” – Mark Jenkins
Courtesy of Meghan at 8:15 AM No comments:

I got a call yesterday afternoon telling me that I have a contract offer to play with a team in Hungary. I will be the first American placed in Hungary that they know of, and the first time they have done anything with this team. Of course, I accepted...haha

So, I leave Dec 26, fly into Rome, say goodbye to my family (who is continuing on to Sicily) spend the day in Rome on Dec 27 and then fly that night into Budapest, Hungary and drive 2.5 hours to Bekescsaba (south east Hungary near the Romanian border). The team's name is Békéscsabai Röplabda Sportegyesület (BRSE - www.brse.hu). The site is all in Hungarian, so its nearly impossible to figure out. The team is in the first league in Hungary, finished 6th last year, trying to make it into the final 4 this year. My contract is from Jan 1-April 30, 2011.

In attempts to improve my Hungarian knowledge base, I researched the alphabet: 44 letters, 15 of them are vowels. Its really disheartening when I read that there are multiple letters that make the same sound. Why the redundancy, you may ask....God only knows, but I felt the need to provide some examples:

So, yeah that's all I've got so far, but pretty exciting...there will be many more posts coming up.
Courtesy of Meghan at 4:13 PM No comments: