Breakfast was ok nothing too spectacular. Ceej and I headed down to the  ski shop to rent our skis and we saw Carly, Ashley, and Destiny.  Everyone in our group had decided to snowboard except for Ceej,  Carly, and I so we stayed together the whole time. Carly gave us some skiing tips  to help us be more in control. We met up with George who was getting  lessons from a 14-year-old pro boarder. Going down the last hill we  ran into Kamryn and Pickle who said that Jessica had gotten hurt. She was  getting put onto a snow mobile sled to be taken to the gondola and  then the hospital.
Jessica and Kendall's story, as told to me:
They consider themselves pro snowboarders but very very bad at getting  off the ski lift. They had gone down the run two times and had been  doing pretty well until Kendall pushed Jessica off of the ski lift.  Jessica’s board went one way and her body went the other. To quote Jessica  directly: "fuck fuck Kendall fuck hurry the fuck up help me...my boot  get my boot out!” Kendall, finally realizing the seriousness of the  situation, rushed to help her, laughing hysterically, and grabbed her  camera to first take pictures. The ski lift operator yelled for them  to move, but once he saw Jessica was hurt, he called ski patrol. She was  loaded on the back of the snowmobile, wrapped in blankets, and rushed  to the hospital. Ceej ran down to the lift and then took the gondola  down to get to the hospital with her. Kendall, Ceej, Urška, and Cory  went to the hospital with Jessica. The doctors and nurses were all very  helpful and friendly, making jokes and taking pictures with the girls.  To everyone's surprise, the hospital was extremely clean and didn't  smell like a regular hospital, but more like a doctor's office. Jessica  ended up only having strained her MCL, which keeps her out of activity  for two weeks.
After dinner we proceeded up the mountain to watch the fireworks in  the city below. The hike took about an hour; people were crawling  (Alison and Destiny), others were slipping and sliding, and everyone  was sweating from all the hard work. After getting to the top, we had  about 30 minutes before the New Year, so George and I got a Banditos  Ice each. There weren’t too many people up on the mountain this year,  so we had plenty room for our American shenanigans. Alison and Destiny  finally made it up the hill and were freezing so Cory got a round of  hot wine for us, which was very good and tasted like apple cider.  After celebrating about 15 minutes of 2009 we all decided to begin out  initial descent down. Those plastic spoon sleds are super speedy and  if you place any weight on them you will go flying, which is exactly  what I did. After zooming past everyone at Mach speed, I got stuck  behind Ceej who was throwing ice in my face. In my attempt to swerve  around, her I lost control and headed straight for the snowdrifts. Luckily, the  large chunks of snow-covered ice provided the friction necessary to  slow down my now rolling body. Regaining composure, I hiked back up a  ways to get my sled, which I gave to John. Kamryn was a few feet away,  so once I slid next to her we conjured up a great plan: she sleds on  her plastic spoon, I link to her arm and slide alongside her on my jacket to provide  the drag needed to remain in control. That was a bad idea. Instead, we  catapulted past everyone, getting closer and closer to what we assumed  would be our deaths. The sled removed itself from under Kamryn and we  continued to slide towards doom. We made a few 360s and a couple log  rolls before Kam decided to dig her legs into the snow to slow us  down. Unfortunately that merely provided her the leverage to begin  rolling on top of me, slamming my skull into the ground. We finally came to  a halt and, through hysterical laughter, attempted to share our versions  of the escapade with each other. We saw George and ran over to tell  her our near death experience. After finally, and somewhat safely,  making the final descent down the mountain we rejoined the group and  laughed to see everyone covered in ice and snow. It was a great trip,  but very necessary for me to shower and change.
The first thing I did in the New Year? Pee myself a tiny bit, twice.
Courtesy of Meghan at 7:07 PM No comments:

Delayed flight to Atlanta=horrible domino effect.
Destiny had to go on the earlier flight due to some miscommunication with the travel agent. The Haber's, Jessi, Andi,  Allison, Ashley, Kam, Jordan R, Holli, Amanda, Ceej, and I made it to our  gate anticipating our boarding. After getting settled on the plane  with the false hope of taking off in the next few minutes, we sat in  line on the runway. Once we landed in Atlanta, Ashley called Destiny  who had boarded before us, and found out that she actually landed after we did.  All flights in Atlanta were delayed, but unfortunately we had missed  our connection to Paris. Ceej texted Carly and found out that she, along  with Mary and Sam, were forced to board our original plane by the airport crew. After  being put on stand-by, we joined up with Kendall and Jessica from Boca. Everyone  got something to eat and then headed to the gate. We then met Joslynn, John, and  Jordan H, all from Daytona. The flight to Paris, starting at midnight  Paris time, was uneventful and many were able to get some shuteye,  while others enjoyed movies and some were annoyed by one of the 17 screaming children aboard. Our flight landed at 10:35am Paris time and we were  shuttled from our plane around the airport to the gate, taking in  sites of construction and various backside locations of the Charles  de Gaulle Airport. We narrowly made our final leg of our journey with me  leading our group of 19 on a light jog across the airport to terminal  F. Once aboard our plane, we received weird but decent French  food...we are eager to get to Venice and begin our land travels to  Izola, Slovenia. Oh and did we mention the girls have a match tonight?  Haha--this should be interesting.
Well out of our total 25 people, including Himi, Colleen, Krista, Sam,  Carly, and Mary, only 12 bags made it to the Aero Porto Marco Polo.  Joslynn is keeping us entertained with her 12-language translator  since no one can hack into the wifi. Holli is watching Hitch on her  mini DVD player; unfortunately Joslynn cannot translate into the  African Click language. The lovely Italians were so accommodating to  the members of our group with lost luggage by supplying them with an  XL t-shirt, a hair brush, tooth paste/brush, a razor, shaving cream,  and deodorant all in a precious little blue dop kit.
The matches for tonight were cancelled so the girls were relieved of  their playing duties. We ate dinner at the hotel marina and then were  given time to walk around town to scope out the town and local shops.
Courtesy of Meghan at 7:05 PM No comments:

The adventures of the world traveling bag

As I journeyed to Slovenia to visit some of my closest European friends, I became a victim of lost baggage. My flight from Jacksonville didn't arrive in JFK until 4:15. That is over 2 hours past  the originally scheduled arrival time. Due to this delay, my bag never made it onto the plane with me. Apparently, when JetBlue flights are  delayed, they only half load the plane with baggage in a piss poor  attempt to make up for their lost time. Unfortunately, I was one of those  people whose bag is still in Jacksonville. After calling my dad and  discussing the wonderful situation I was in, we made the executive  decision to forgo the baggage entirely and make a run for it. Thanks  to Raph (our strength trainer) I was able to move close to the speed of light and make it to  the air train to take me to terminal 1. The Austrian airline workers  were anticipating my arrival, no idea how, and were able to get me all  checked in and through security. After sprinting through the crowds of  people, I located my gate: at the end of the longest terminal ever. Of  course. Now: sweating like an overweight man. Seat 22a.
My flight from JFK to Austria wound up getting in a few minutes before schedule. That would be  great if I needed to hurry through baggage and customs, but  considering I have no luggage and therefore nothing whatsoever to  claim, who cares that we're early?

JetBlue took responsibility for losing my luggage and shipped it to Nina's house...after 2 weeks with them, I left to go to Maribor and they left for Spain. After a few failed attempts to retrieve the bag with Sara when I first visited her in Ljubljana, conveniently the same day the bag arrived there. We filled out the requested paperwork and wrote a document stating I only have personal items in the bag; we were told that this action would speed up the process. They lied. My mom kept tracking the bag and calling the local Slovenia branch of FedEx and finally told me to talk to Cory and Andreja for them to help contact the Ljubljana FedEx and allow me to get my bag.  Nejc and I drove in circles around a town outside of Ljubljana before finally stopping and asking for better directions than were provided to us by the FedEx woman. A few suspect left turns later, Nejc pulled up to the store and we went in to request my bag. Reaching our destination, we went in and requested my bag. While Nejc conversed with the manager in Slovenian, I was able to play a convincing dumb-American role, responding with a confused “no?” in response to their requested payment. There is no way I would be playing for my own luggage.  In the farthest back left corner, behind a car and boxes lay a  familiar black duffel bag. Victim spotted! After checking the tags and  tracking number for about the millionth time, I received sole custody.  I signed a paper, dating it 6/2/09, 16:30 as the retrieval date.  Package signed and delivered! Never again will I do international  business win FedEx. After spending just shy of two weeks without clothing, I had been reunited with my belongings. 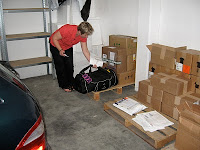 Here are the many places it has traveled:
May 18 my house, Ponte Vedra, FL
May 19 JIA, Jacksonville, FL
May 20 Jamaica New York
May 21 Newark, New Jersey
May 22 Paris France
May 23 Frankfurt Germany
May 24-June 2 Ljubljana, Slovenia
June 2, 16:30 Nejc and I picked it up from FedEx
Courtesy of Meghan at 1:28 PM No comments: