In October, a new volleyball league is launched, creating a league with some of the best volleyball teams in the Oresund area. Three Danish teams (Amager, Brøndby, Holte) and three Swedish teams (Engelholm, Gislaved, Svedala) will be competing in this unique tournament. This initiative will develop volleyball around Oresund and allow for a new view on geography, as borders are no obstacle for this high level sports collaboration.
The Oresund Liga, sponsored by Alfa Laval, was initiated and planned in a collaboration between three Danish and three Swedish volleyball clubs. The tournament will include 18 overseas matches as well as 12 matches in the two national leagues.
The tournament ends in March 2016, at which time the team with the highest score wins the title of Oresund Champion Team 2016.
For more information, visit: www.oresundliga.com
For team schedule and information, click on the image below.

Courtesy of Meghan at 8:15 AM No comments:

Invitations have gone out to boys and girls youth national team hopefuls. Age groups include U17 and U19, which will train 18-20 September in hope of being selected to the 12-player rosters that will represent Sweden at the Nordic Championships. The tournament will be played in Kettering, England, 29 October - 1 November 2015.

The players are called to participate in a training camp held in Falköping, home of the Swedish national sports high school (RIG Falköping) from September 18 to 20. After the camp, 12 athletes will be selected to represent Sweden at the 2015 Nevza Championship. Prior to tournament participation, the 12-man squad will have additional team preparation October 26-28, 2015. 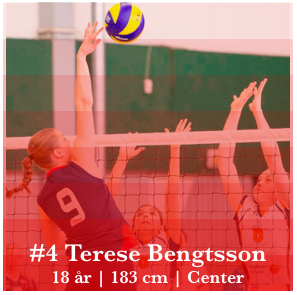 Coach: Oskar Jonsson Vikterlöf, RIG Falköping
Courtesy of Meghan at 8:49 AM No comments:

Gislaved Volleybollklubb has posted their decision to lift four players from its developmental team to the elitserien squad for the 2015/16 season. Players include Pauline Adolfsson, Sofie Bäck, Emina Bosno, and Emma Tegnhammar.

"It is fun to have the opportunity to lift up your own players to the first team. We welcome four talented and ambitious girls from our own youth program, and the club feels great satisfaction in the ability to do so. The club's primary mission is focused on youth development, and this is an extremely positive outcome."

Read more »
Courtesy of Meghan at 1:54 PM No comments:

Welcome back to GVK Ida! We are happy that you have signed with us and thought to ask a few questions to get to know you a little better. 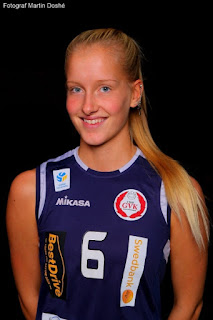 What are you looking forward to next season?
I look forward to just about everything with the upcoming season! New team, new coach and my former home!

What do you think you can bring to the team?
I hope to contribute energy and fighting spirit!

How long have you been playing volleyball?
I have played volleyball since I was 14 years old, so six years!

What made you choose GVK?
It's my home club. Being away is good, but being home is the best!

What is the best thing about volleyball?
Team spirit, fighting spirit and challenges!

Courtesy of Meghan at 6:01 AM No comments:

"She is proficient in blocking and knows how to score," says sports director Lars Englund.

The club has retained much of last year's squad and has so far recruited two players from outside the organization - until now.

She comes from KFUM Göteborg, where the ladies team had to recently withdraw from the highest series.

"Yes, she will continue to live there, and will train with us as much as she can. I know right now it is at least full time every other weeks, and then she will train in Göteborg with those who remain from last year's elitserien team," says Englund.

Ida is not an unknown name to Gislaved. She has grown up in GVK and trained with the elitserien team until just last season when she was moved for work in Göteborg.

"She's pretty tall and she is solid in blocking and knows how to score. She has trained as spiker, too, and it has little of that still in herself. We plan to use her in the middle. That's how it is."

Lindbäck, according to Englund, is the last player to sign. But that may change. Rumors that Katrineholm drop out of the series, so one might find some gems there.

"We are quite satisfied. Of course it could be fun to bring in more fresh faces [from outside GVK], but now it is as it is. Since I do not know what it will be for players in Katrineholm, they may become available if they are pulling out [of the elitserien]." 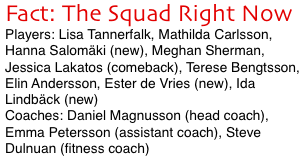 "We have discussed a lot of names but after careful consideration, we decided that it feels like our core group is very engaged. We run what we have, I think there will be more than good enough."

Ten players are now officially signed for GVK elit, but the squad will be complete with 14. Several development players from the junior team will be lifted up over time.

"Some truly deserve it. All the girls have been absolutely great to train all summer."
Courtesy of Meghan at 5:23 AM No comments: 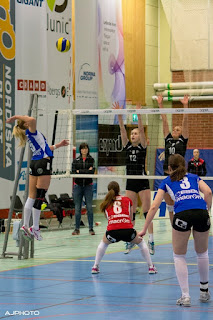 Welcome Lina! We thought about asking some questions for you to get to know you a little better.
What are you looking forward to next season?The first and foremost be whole and start playing again. Since getting developed both gameplay and individually.

What do you think you can bring to the team?I have a strong training willingness and hope I can help with that. Hopefully a little joy too.

How long have you been playing volleyball? I started playing when I was 13 I think, as soon as 8 years.

What made ​​you chose GVK?An obvious choice to play for the parent club.

What is the best thing about volleyball?It's a fun team sport with individual performance. It is also good pace and is very much about understanding of the game, I like that.
Courtesy of Meghan at 5:11 AM No comments:

Gislaved VK welcomes Emma Petersson and Steve Duluan to the elitserien coaching staff. Emma will serve as an assistant coach to head coach Daniel Magnusson, while Steve will serve as the team's strength trainer.

Emma has a long career as a volleyball player. She started at age ten and has journeyed through Gislaved's youth teams before she entered the national sports high school for volleyball in Falköping as a 16 year old, studying for three years before returning to GVK.

"It will be really fun to be a part of the team when I cannot play myself after injuring my knee last year. It will also be fun to see how the girls developed. At the same time, it's great fun to get the chance to become an assistant. The team is super and I like the girls, although Daniel is very good and exciting to know that he wanted me as an assistant," says Emma.

In addition to confirming an assistant coach, GVK has brought in a fitness coach for the team, Steve Dulnuan. Steve is known for its popular training sessions known as "SteveFit" as he runs in Gislaved. He is American and certified CrossFit Level 1 Trainer and received additional training in Denmark.

"This will be exciting. I have not start training the team yet. I hope to help them physically with speed and become more efficient in their movements," says Steve Dulnuan.

"We hope, through the additions of Steve and Emma, to get a very strong complement to Daniel Magnusson," says Lars Englund, Sports Director.

Steve will develop the girls physically, something we have desired in the past, but have not managed to find the right fit. Now it feels as though we have checked that off our to-do list.

Emma brings her playing experience to help develop technical aspects of the team.

"It feels simply great for the coming season," Lars Englund.
Courtesy of Meghan at 2:20 PM No comments:

The outside hitter most recently played with the Dutch team Irmato VC Weert and Volleyball Franches-Montagnes of Switzerland. She previously played two seasons at the University of San Francisco in the United States.

Ester de Vries is a 23-year-old outside hitter from the Netherlands. We asked her a few questions to get to know her better before she joins us in Gislaved.

What are you looking forward to most this season?
Winning games! And learning and improving in volleyball.

What can you contribute to the team?
My better qualities are at the net. I love hitting, and blocking even more. Besides that, I like to lead by example by working hard.

How long have you played volleyball?
I started playing volleyball at the age of 7. My mom took me with her to her own practices, and I loved it.

Why did you choose to play for GVK?
From what I have seen on videos the team looks great! And I am ready for a new experience, this time in Sweden.

What's the best part about playing volleyball?
Playing in a team, the excitement of fighting for every point and eventually the excitement of playing well and/or winning.
Courtesy of Meghan at 10:19 AM No comments: