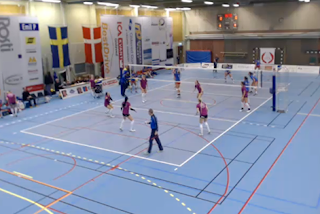 
"I think we played a great match. Of course we want a win, but the way we fought on is fantastic," says coach Daniel Magnusson.

Brøndby offered a faster game than the GVK players are used to. Still, the home team was able to win the first set.

And they did it.

The home team trailed 16-20. Then stood GVK as a team and Lisa Tannerfalk, Hanna Salomäki and Ester de Vries stepped forward and dared to win.

GVK did not give up. De Vries gave hope for a set win with a hard jump serve.

The Dutch spiker served on and on, and finished the set 26-24 was an ace.

Brøndby won the second set. But GVK fought back to take the third set with 25-20.

In the fourth set, the visiting Danes increase their tempo, it seemed difficult for GVK to keep up.

"They play incredibly fast. There is no Swedish team that plays so quickly. We did not have time to come up and take the block. But it is still amazing that we are so close to winning against them."

In the fifth set ended with the home team trailing Brøndby's tempo, and ended the match 8-15.

"Now we reload for Engelholm. This is the match that we have focused on most for this weekend. The girls will eat together tonight to find and get new energy from each other and then it's game-on Sunday afternoon again."
Courtesy of Meghan at 3:34 PM